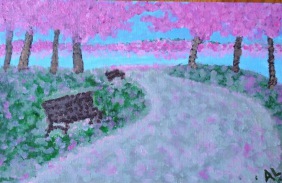 “Mr. Sorenson, what are you going to do now?”

“Are you and your wife staying together?”

Focus on the courthouse. Look at all those bricks. Keep walking. Almost there. She’s shaking. Jeff kisses her hand and squeezes it.

The courtroom door swings open and slowly returns to place like an empty swing swaying at the park.

Jeff was out of town on a business trip. Nicky phoned him hysterical, after calling the police. She woke up and their daughter wasn’t there.

“No, officer, it wasn’t secured,” she said. The back sliding door was hardly ever locked.

“Has she run away before?”

“No. Why would anyone take my baby?”

Jeff flew home on the next flight.

Who would do such a thing? What kind of monster? He had never seen his wife cry as much as she did that night.

Tripping over Barbie dolls and teddy bears, he stared vacantly at Karen’s room.

At the press conference, Nicky held her husband’s hand. They prayed for the safe return of their missing child. Jeff described her, “She’s blonde with beautiful green eyes like her mommy.”

A week later, the joggers in the woods near the playground across town found her—not in her pajamas, but in jeans, t-shirt, pink ruffled socks, and tennis shoes. That’s strange.

Cause of death: Asphyxiation.

The lawyer steps forward. “My client pleads not guilty.”

They walk out of the courtroom, heads down. Reporters with cameras surround them.

“Mr. Sorenson, is it true that both of you were taken in for questioning?”

“How do you explain the clothing—”

“—disappearance of your daughter?”

"Leave us alone. We’ve been through enough," Jeff says.

Jeff and Nicky push forward, arms around each other, and deny the allegations.

I can’t lose two of them.

The lawyer shields them best as he can.

Back at home in their driveway, Jeff stares into Nicky’s eyes. She tells him about seeing a woman walking away from the playground and dropping a jump rope in an alley dumpster.

It doesn't make sense. Karen disappeared during the night. Is Nicky changing her story? “Damn it, why didn’t you say something, Nicky?”

She doesn’t react. Then she averts her eyes and bites her nails.

Jeff runs to the bathroom and throws up. We buried Karen in her pink Sunday dress. He throws up again.

By the time he's emptied his stomach, Nicky is passed out on the couch in the living room. Jeff realizes what Nicky’s despondency meant; it wasn’t just his job. He couldn’t keep making excuses for her anymore.

As he packs his bag, Jeff throws in some photos of the three of them. Rips Nicky out of the picture, wipes his tears on his sleeve, and kisses Karen's image. I’m sorry.