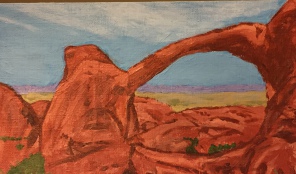 Lemon blossoms, with their sweet fragrance wafting from the trees, floated down, twirling in the breeze. Landing on the sticky fluid strewn across the wild grass, white petals became trapped and absorbed a crimson tint.

Women and children—their arms and legs bent at all angles—littered the fields like discarded carcasses from a hunt. Matted hair and tattered clothes waved at the men, taunting them with the visage of life.

Running from mound to mound in search of survivors, the men uttered not a word, for fear of damning all hope. Muscles rippled underneath clothing sewn by mothers and wives—the only lasting memories of existence.

A great roar erupted from deep within Yuji’s chest, shaking his massive frame. The other men turned to their leader. Nature answered. Air whipped the ripe citrus from branches, and pounded them into the ground. The horses, left in the valley below, neighed and stomped about. Yuji’s black mane flew back and exposed his chiseled sun-kissed face. His brown eyes darkened as he bared his teeth.

“What now?” with his head hung, Heigel whispered, not capable of anything more. Heigel, the mighty warrior, collapsed at Yuji’s feet.

Squatting down to the beautiful female before him, Yuji pulled a cloth from her dead grasp, her only souvenir from the great struggle. Moving the striped fabric between his fingers, he sniffed the woven thread. Jaw locked, Yuji stood tall, raised the cloth in his outstretched fist, and yelled, “Revenge!”

In sync with their leader, the two dozen warriors turned to Yuji, pumped their fists in the air and in unison howled, “Revenge!” Their battle cry echoed from the hillsides.

Then a tiny muffled sound broke their chant like a small pebble rolling down a grand mountain. Yuji’s arm halted the men, stilled the wind, and calmed the horses.

Listening intently, Yuji and Heigel edged toward the thick underbrush at the base of the steep rocky incline. Silence.

Yugi reached into the bushes. Thistles tore at his arms. Oblivious to the deep etching along his skin, he leaned in deeper, nearly falling inside when his finger tips brushed against something soft. He pulled the lump of fur from its hiding place only to discover that it wasn’t fur at all—but a thick blanket that he knew all too well.

Yugi unwrapped multiple layers of blankets. Like prying open an oyster to find a perfect pearl, he discovered the small gift held inside—the final present left to him from his beloved.

Yugi nodded and clasped the infant girl to his chest, shielding her from the bloody destruction behind them. “If Gabtooa had been any older, Kinoa would not have been able to hide our daughter away, to spare her from…” Thunder roared overhead. “The gods are angered.”  Still early afternoon, clouds darkened the sky. “But the gods will be on our side.”

“Tomorrow, we ride to the Zorzee Tribe.” Yugi rocked Gabtooa who slept in the comfort of her father’s arms. “My beloved Kinoa fought well. She saved this fabric from the Zorzee leader’s headdress.” He handed the bloodied cloth to Heigel.

Yugi furrowed his brow and stared hard at his companion. He closed his eyes and nodded.

After a few minutes of thoughtful silence, the two men returned to the others.